Who doesn’t love a bear?

This week join Maureen Mann and a host of bears – fictional and factual -
in all their furry glory.

Bears are such an archetypal children’s toy, beloved around the world. So it’s no wonder that authors enjoy creating stories with this loveable creature as the main character, and readers – both child and adult – enjoy sharing them.
There seems to have been many recent picture books so here are some which I have enjoyed. 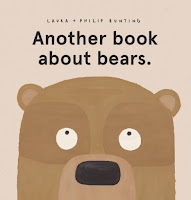 Another Book about Bears by Laura and Philip Bunting
Bear is tired of being the star of all stories and suggests other animals none of whom fit. There’s clever use of puns and plenty to make readers of all ages stop and think as well as discuss the concepts.
All Right Already: A snowy Story by Jory John and Benji Davies
Duck excitedly cajoles an unwilling Bear out into the snow, where he doesn’t want to do anything. Bear finally goes inside when he starts sneezing and coughing. Duck looks after him. And then it’s Bear’s turn to reciprocate. Two font styles show which character is speaking, and the illustrations are in a restricted colour range. It’s a bit of a silly story really but kids will enjoy it. 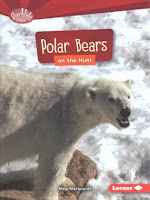 Polar Bears on the Hunt by Meg Marquardt
This non-fiction book for primary school aged students has four chapters: living on the ice, hunting, made for the cold and polar bear behaviour. It concludes with a fact file, glossary, index and where to go for more information. 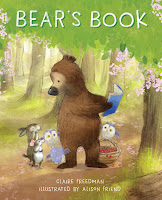 Bear’s Book by Claire Freedman & Alison Friend
All Bear’s books have fallen to pieces because they have been read so often, so he decides to write his own story. Inspiration doesn’t come. While waiting he meets his friends. He helps Mouse practice for the mouse ball; Rabbit when he dropped his oars; Baby Owl stuck out on a tree limb. These adventures lead to Bear’s story about pirates. 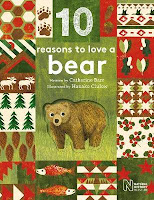 10 Reasons to Love a Bear by Catherine Barr and Hanako Clulow
This non-fiction book looks at the 8 kinds of bears around the world, their habitats and behaviours which are shared, or which are unique to just one. A good introduction.
Little Bear’s Big House by Benjamin Chaud

Little Bear is tired of living with his sleepy brothers so sets off on an adventure, just like a little boy. On the way, he’s tempted by his former forest playmates but he keeps going till he reaches an uninhabited house. He’s delighted by the adventures in it, until the night noises spook him, and he scurries back to the security of home. This fun story, in its large format with detailed illustrations, was originally published in France. 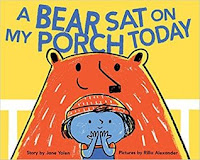 
Though full of North American animals, children here will enjoy the cumulative and repetitious text. After the bear visits the porch, and the young owner reluctantly agrees to his presence, he is joined by other animals until the added weight causes it to sway and break. All the animals cooperate to fix it all up. 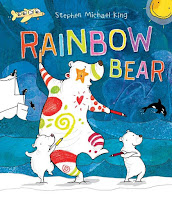 Rainbow Bear by Stephen Michael King
King’s illustrations always hit the spot for me, and this one is no exception. After Father Polar Bear returns from the city with presents for everyone, he discovers that his coat changes colour every morning. He finally realises how and why and reciprocates one night. It’s full of humour and at times, bright child-like colouring, with many unexpected details to keep young readers searching the pages and learning this isn’t reality.  The end pages are reminiscent of a child’s colouring book.
A Book of Bears: At Home with Bears Around the World by Katie Viggers
This is a good introduction to bears with a double-page devoted to each of the eight bear families and another section with double pages about swimming, eating, climbing, running and hibernating. Each page includes size, Latin name, descriptions and a humorous comment about them. The latter occasionally seemed inappropriate in a non-fiction book but children will enjoy this. 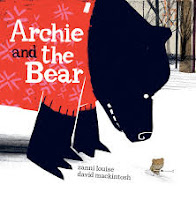 Archie and the Bear by Zanni Louise and David Macintosh
Neither of the characters in this fun book is who he seems to be. Archie leaves home to go to the forest, as he should, being a bear. There he meets the Bear and together they teach each other to fish, skip stones and read, until the evening chill reaches them both and they return home to snuggle under the quilt. Lots of discussion, about being who you think you are, is sure to result. 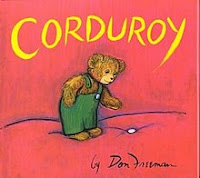 But we mustn’t forget the wonderful stories from the past: Paddington Bear, The Very Sleepy Bear, Hugless Douglas, Corduroy, Where is Bear?, the Berenstain Bears as a series, and of course the many versions of Goldilocks.
What’s your favourite book about bears?
Maureen Mann
Picture book lover