Shine Mountain Gleams in the Limelight

Book launches are special – a magical way to gain insights into a book through the eyes of another. This week, Patsy Jones shares her recent Hobart book launch experience for Julie Hunt’s much anticipated Shine Mountain – and exposes a little bit of herself and of the book launcher as well. Is there such an entity as a book launcher? – it creates visions of a book rocketing off into space or, in this case into…Gleam Land.

I wonder how many of you have ever been invited to launch a book? I once had that opportunity, and was very pleased and flattered to be asked. But as the date of the launch drew near, I began to feel very anxious and unsure of my ability to do justice to the book…..So in one way I was not too disappointed to find myself incapable of carrying out the task after being hit by a horrible stomach virus on the day itself (fortunately the author was able to find another speaker at the last minute!) 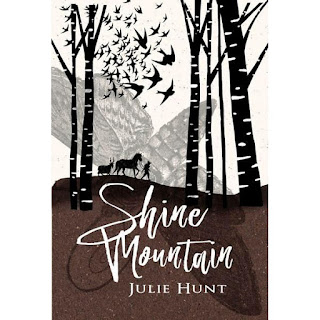 Recently I attended the launch of the most recent publication of Tasmanian writer Julie Hunt  - Shine Mountain, at Fullers Bookshop in Hobart. The launch was hosted by Robin Morrow, Australian President of IBBY (International Board onBooks for Young People). I found what she had to say, and how she said it, very impressive, and felt quite fortunate that I had never actually had to expose my own shortcomings in this way!
Robin very kindly sent me a copy of her speech, and below are some of the aspects of the book that she mentioned as being of special interest to her.
A map: Because the book is set in an imaginary world, Julie provided a map at the beginning of the book (a wonderful greyscale imagining of Gleam Land, penned by Geoff Kelly). I found myself turning to the map many times during my reading of the book, and when I read other fantasy stories, I like to place the characters in their landscape as well. But Robin did not mention just Julie’s map – as well, she referred to some other favourites which also flesh out the story with a map – Winnie-the-Pooh, Lord of the Rings, and Milly Molly Mandy, for example. I expect many people in her audience made a mental note to read or re-read these books on being reminded of them…..
The characters: Robin described these as ‘memorable and varied’ – Ellie, of course, Luca and Meridian; and Nanny the goat who, despite being an animal, is so very important to the story.
The button-box: Robin’s audience actually saw a button-box, part of the support provided by a group of students who demonstrated aspects of the story for the audience. This button-box appeared to be a well-aged example of the concertina/accordion variety which we don’t see so much these days. Perhaps there are many children today to whom it is a totally new instrument!
Placenames, magic, folklore, and landscape were other elements of the story which Robin mentioned. I am sure the references to these elements provoked a broader and more intellectual response in those fortunate children who went home from Fullers with their own copy of Shine Mountain.
To me, this was an amazing example of how a book can be launched; thanks so much, Robin; and thanks to Julie, of course, without whom we wouldn’t have had this opportunity…..
Patsy Jones
Retired librarian and teacher
Posted by CBCA Tasmania at 03:02