Little Free Libraries are building momentum across the globe. Felicity provides some background on this groundswell and some local Tasmanian initiatives for some inspiration. If you know of other Tasmanian pop up libraries why not share with us.

I’m sure that you are all familiar with the concept of the Little Free Libraries (LFL).

I’ve read with interest the problems created when these have contravened council planning laws, and the owners have been required to remove them from their front lawns (mainly in the USA, admittedly).
I was however surprised to read an article recently which was negative about this initiative. The gist of the Toronto research was that these libraries generally ‘popped up’ in places where the community were upper middle class and had access to excellent library services, and instead were seen as being a form of social privilege, akin to snobbery (Martinko, 2017).
The Little Free Library is a not for profit, that charges $40 USD to register as a Little Free Library. They currently have over 50,000 LFLs registered. They also sell the bird house style library boxes from between $175 and $2500. All ‘profit’ is reportedly used to provide libraries in areas of need, says Todd Bol co-founder (Off & Douglas, 2017).
The Toronto research also found that the libraries didn’t enhance community interaction, and that in fact the owners avoided making contact with those who frequented their front lawns. Margaret Aldrich writes about the opposite experience, when creating her LFL in Minneapolis, in her article 5 Reasons to Love Little Free Libraries (Aldrich, 2015). Could this be one instance where Americans have trumped Canada (pun intended)? 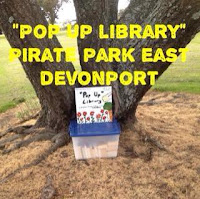 Tammy Milne, a social activist, library technician, and Devonport alderman, has created ‘pop-up libraries’ in Devonport. Books (in plastic crates), are to be found at the “Pop Up Library” Devonport Foreshore, along the Victoria Parade walkway, in Pioneer Park in East Devonport, and at a local coffee shop. Two of these locations have their own Facebook pages. The “Pop Up Library” Pirate Park East Devonport is in a lower socio-economic location, and the Victoria Parade library in a high socio-economic location. There have been many instances where these boxes have been vandalised (no more so in East Devonport, than on Victoria Parade), and times when Tammy has decided to not continue, but the overwhelming public support for this grass roots initiative has rallied Tammy’s passion and the Pop-up Libraries remain. There have even been times when vandalism has been reported to Tammy, and upon arriving to fix the issue, finds that a generous anonymous person has already rectified the problem. 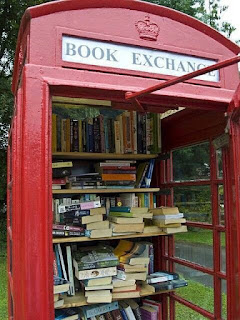 Pinterest have some fascinating examples of little libraries, and in UK villages, red phone boxes are being repurposed as Book Exchanges.
Little Free Libraries, Pop-up Libraries, Book Crossings are all ways to share books with the wider community. What have been your experiences of these free book sharing schemes? What do you do with books you no longer want or need on your bookshelves?