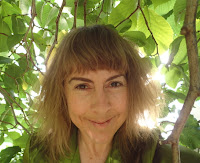 Tasmanian writer, Nicole Gill, provides a snapshot of significant moments during her recent participation in a writers’ festival based in Alice Springs where the allure of the outback is evocatively captured. Certainly some desert inspiration is evident!

Last month, I was lucky enough to be a participating author at the Northern Territory Writers' Festival. The festival is held annually, with Darwin and Alice Springs taking turns, and this year, the event was centred around the lovely Olive Pink Botanic Gardens, to the east of the main Alice township.

The festival featured writers from all over the country, with strong representation from local and visiting indigenous writers, historians, artists, songwomen and storytellers. In Arrernte, the local Indigenous language, iwerre-atherre means two roads meeting, neither blocking nor erasing the other; two-way learning or travelling together. This was the theme of this year’s festival.

I was fortunate enough to travel together, and learn with, local ecologists, wildlife experts, students and teachers from the Centralian Middle School, in my role as a coordinator on a workshop that combined ecology with creative writing. High school students were challenged to look closely at some of the region’s local animals, and then to design their own animals, and to describe their adaptations in a creative writing exercise. 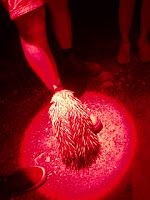 On the Wednesday night, we gathered at the Alice Springs Desert Park to observe nocturnal desert animals. In the heat of the day, many of the region’s animals snooze in caves or burrows, but at night, they come to life. The Desert Park is home to hundreds of native marsupials, and they are at such densities within the fenced enclosure that they require supplementary feeding on a nightly basis. This makes for an intimate wildlife experience, and gave the students the chance to observe the animals up close. By red-torch light, 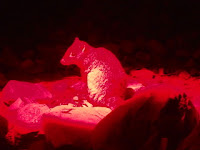 they met delicate mala; a small desert wallaby thought to be extinct in the wild, as well as some pushy, very spiky echidnas, clambering up the guide’s legs to get at the bucket of ‘ant smoothie’ he carried for their dinner. As we walked through the enclosure, trying not to tread on overfriendly bettongs or emboldened bandicoots, we spoke with the students about what adaptations and behaviours allow these animals to survive in the harsh desert environment. The students took notes, both by hand, and also using their iPads as cameras, for use the following day.

Back at school the next day, students chose from a range of printed images of Australian animals, and created collages of their ultimate desert beast. Using the information they’d gained the previous night, and with scissors and glue, they created their Franken-beasts of the desert, and then worked to label their drawings, describing how the different adaptations of the creatures they’d created helped them survive in a desert environment. The collages allowed varying literacy levels to be accommodated - less confident writers could write short, simple descriptions, while more proficient scribes could write lengthy tracts on exactly why their beast was the most feared predator of the desert!

I also ran a festival workshop for adults with local ecologist and poet Meg Mooney, called Nature Town, which focused on nature writing within urban environments. Alice Springs is a lot like Hobart in that the boundaries between the town and the bush seem very porous – in fact, this is the first literary festival I’ve ever been to which has seen areas cordoned off due to the presence of snakes!

Next year’s Northern Territory Writers Festival will be held in Darwin in May 2018.  Judging by the excellent program this year, it’ll be well worth getting along to – and an excellent excuse to get a final blast of sunshine before the Tasmanian winter begins!

Nicole is a Tasmanian author, whose writings on the environment, humans and other animals have The Monthly, Island, The Guardian and The Best Australian Science Writing. She was a shortlistee for the 2016 Bragg UNSW Press Prize for Science Writing, and her first book for children, Animal Eco-Warriors was published through CSIRO Publishing in June 2017. You can find Nicole on
Twitter: @tasbiophiliac
and occasionally, on her author site on
Facebook: https://www.facebook.com/nicgillauthor/
Posted by CBCA Tasmania at 00:31