Inspired by her current geographic location, Maureen Mann connects with the Queen’s birthday celebrations and what's on the English bookshop shelf.

I have been mulling over what to write about for this blog and have wandered from idea to idea. The world seems to have lost many wonderful children’s authors and illustrators recently, including, in March, Peggy Fortnum, who illustrated Michael Bond’s Paddington series and in February Kim Gamble who brought the Tashi series so perfectly alive. But I discarded this idea as, sadly, there were too many to focus on. Or mention Roald Dahl’s centenary in 2016? Not enough time to do him justice.

Queen Elizabeth celebrated her 90th birthday in April, with official celebrations in England last weekend.  Disney has combined the 90th anniversary of Winnie the Pooh with that of the Queen to produce a story combining both characters, only available online. It’s called Winnie the Pooh and the Royal Birthday. 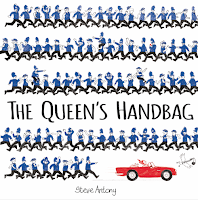 I love The Queen’s Knickers by Nicholas Allan. It was first published in 1995 but has not dated: the child narrator imagines all the kinds of knickers which the Queen might wear for different functions. It’s full of humour suited to both the child and adult reader. In The Queen’s Handbag (2015) by Steve Antony, a swan, dressed in a mask and stripy top, steals her handbag and the Queen pursues the swan across England to try to retrieve her bag. It’s fun, a good introduction to famous places in the UK and encourages the reader to search the page as well. Antony’s previous book was equally humorous: The Queen’s Hat which takes the reader on a chase across London after a strong gust of wind grabs the hat and she and her guards – soldiers, Beefeaters, etc – chase it till it falls on the head of the baby prince. 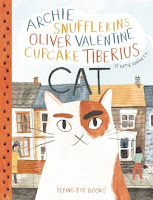 And then I ventured into a local bookshop to see what was new in England in the world of children’s books. Lots of titles of course. Here are some which caught my eye.

Archie Snufflekins Oliver Valentine Cupcake Tiberius Cat by Katie Hartnett is the story of a cat, rather like Six Dinner Sid. He has differing names at all the houses on Blossom St but suddenly goes missing and as the reader learns, he befriends lonely Mrs Murray and in doing so, brings the community together. 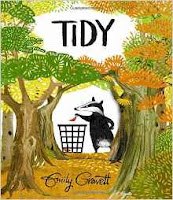 Tidy by Emily Gravett.
I have always enjoyed Gravett’s quirky view of life and in this book she maintains her skills, as one would expect from a double winner of the Kate Greenaway award. Tidy is about Pete, an OCD badger who wants to keep the woods tidy, to such an extent that he removes even the trees till he realises that by doing so, he has taken away all that is important. He and his friends combine to return it all to normal. It’s a wonderful story in itself, with a strong environmental message. 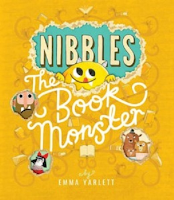 Nibbles: The Book Monster by Emma Yarlett. Nibbles loves eating books, entering the stories he finds inside them and causing mayhem. There are many, many flaps to explore as well as holes in the pages as though Nibbles had started work on this book. The reader (child and adult) will enjoy recognising the fractured stories and will have fun with the layout. The cover is really tactile with a lovely feel.

The world’s current refugee crisis is echoed in The Journey by Francesca Sanna. The reader follows a mother and her children as they are forced to flee conflict in their homeland. The reasons are clearly explained for and by the young narrator without losing the power of the story for any adult. The illustrations are a really important addition to the verbal text. 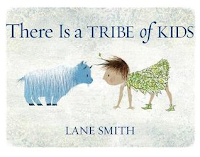 Lane Smith is another of my favourite authors and There is a Tribe of Kids doesn’t disappoint. A boy sets off and comes across a range of animals, including young goats. The language is rich and rhythmical: undulates in a smack of jellyfish, a constellation of stars and other unusual collective nouns. Along the way, the child realises that we all need to spend time and fit in with our own ‘tribe’. The illustrations have been created with a sponge-paint technique.