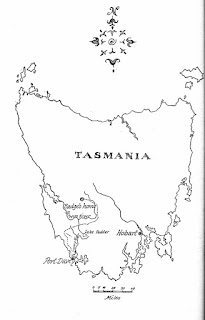 Join Richard as he explores the geographical location of Nan Chauncy’s Lorenny series in the deep south west of Tasmania.

One of the unexpected outcomes of the 2015 Nan Chauncy celebrations was my discovery of the Tiger in the Bush / Devils’ Hill / Roaring 40 trilogy (thanks to Patsy for lending me the series). The mingling of fact and fiction certainly had me scouring the maps, Google Earth, and old photos of the area.

The series is about the adventures of Badge Lorenny, (short for badger, a misnomer for wombat) and his family who live in an isolated valley in South West Tasmania. My interest was piqued when I became aware that access to this isolated valley was a wire rope, “The Wire”, over the Gordon River. I immediately (and quite erroneously) thought this was a direct reference to a flying fox over the Gordon River that I had used in 1983 to walk into the Vale of Rasselas. 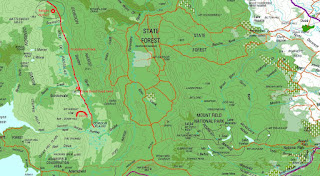 My obsession with the geography of the series began. My first impression that Lorenny farm was approached northwards over a flying fox at Gordon Bend was incorrect; it was approached from Badge’s uncle Link’s farm near Ouse. Is it too long a bow to think Lorenny derived from Lawrenny, a hamlet just south of Ouse? On a map, Badge described it as “the dingy space between the upper bend of the Gordon River and Denison Ranges”. 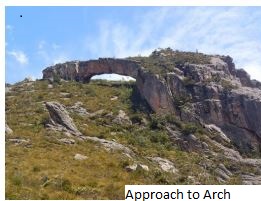 Arches Hill where Badge and his sister Iggy walked in Tiger in the Bush are probably inspired by the arch on Mt Wright. The approach to this arch is clearly not bush as in the Tiger in the Bush nor could two children get there in a day from the farm.

In the Author’s Note in Tiger in the Bush, Nan thanks amongst others “the first woman to scale Mt Anne, Eve Masterman”. She omitted to say that Eve was Nan’s sister. I had the honour of meeting Eve at a CBCA picnic at Chauncy Vale in February 2012. Though deaf she was still quite spry and very interested in bushwalking. I expect much of the inspiration for the “geography” of this series was derived from Eve and her bushwalking friends. Much more inspiring than the geography of New York or dystopian Chicago which appears in many YA books (even by Australian authors).