Jane Dobbs shares the setting up of this memorable display at Kingston LINC and some of the personal stories it is generating. Worth a visit, especially on the 18th August to listen to Nan's daughter, Heather Chauncy.

As soon as it was confirmed that Kingston LINC would be a stopping point for the Nan Chauncy Travelling Suitcase exhibition, all the staff were thrown into a frenzy of activity in preparation.

Glass display cabinets were firstly allocated, then buffed and polished in anticipation.

Books were quickly ordered in – both from our lending collection and our very cherished and precious Children’s Literature Collection.

It was decided that the display be situated in the entrance of the LINC, so that, when our customers came into the LINC, they were enveloped into a world of Nan Chauncy.

The area includes a large internal window which I usually try to decorate to complement the display or theme that surrounds it. To celebrate the work of Nan Chauncy I researched her work through both the Children’s Book Council of Australia site and, of course, through the powers of Google!!! Finding the facsimile of the original of the movie poster for ‘They found a Cave’, I decided that I could utilise the graphic image of the silhouette of the children at the entrance to the cave. Thinking I may have bitten off more than I could chew, I got one of the printing companies to blow up the image, used that as a template and headed off to the local newsagent to buy up their supply of black card, traced around the photocopy…and after a frenzy of scalpel and scissor work (think Edward Scissorhands crossed with a bit of twister thrown in for good measure!) the piece was completed.

Sadly it was on the floor in my spare room at home…a friend and I somehow managed, with the help of a large bedsheet and an even larger four wheel drive boot, to get the work into the LINC unscathed and then there was another frenzy this time involving vast amounts of blutack before the work was positioned centrally and straight on the window. 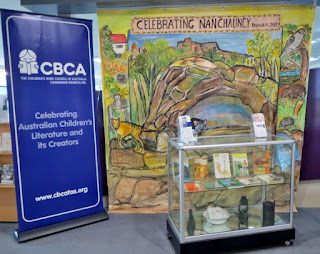 Patsy Jones from the CBCA (Tas) then arrived to set up the display ….luckily we were able to hang the amazing and colourful banner produced by Jill McElwee to complement the book display. The banner, showing through the glass of one of the cabinets, is a lovely backdrop and so perfectly suits the mood and feel of the items in the cabinet.

The Nan Chauncy Travelling Suitcase display has reached out to the community in a unique and inclusive way.

One of our customers who is also a member of the Friends of the Library Kingston (FOLK) allowed us to display an ‘uncorrected’ version of ‘The Roaring 40’ with a lovely story behind the book: 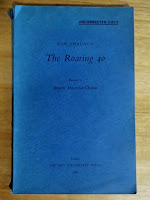 “This came from my parent’s books when their house was sold. We used to sell chickens to Nan Chauncy and bought a milking goat from her. We would visit Chauncy Vale for deliveries – late 50s or early 60s.”

A few days after installing the exhibition, a gentleman was looking at the display and asked a question about one of the pieces. Whilst chatting to him, I discovered he was an avid collector of Nan Chauncy’s first editions and that he was willing to add his collection of 15 books to our display!!

Asking him how he came to start collecting Nan Chauncy novels prompted this anecdote which was told to me with great warmth and fondness: 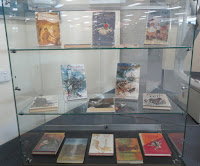 “A home-sick mother and her six year old son sat in a Brisbane movie theatre in early 1963 and enjoyed what was probably this young boy’s first movie experience. As the years passed by, about the only things that the boy remembered was that the children, “the goodies” won the day and the absolutely amazing colour of the cave. Little did that boy know that many years later he would return to Tasmania (via six primary schools, two high schools and three tertiary institutions in three different states) and train to become a primary school teacher. During the next nearly forty years he married a gorgeous lady, raised two beautiful sons, taught a thousand students and never forgot the colourful cave which was home to the children who triumphed over adversity. He even shared a few of Nan’s stories along the way, showed her two films, visited Chauncy Vale and met one of the cameramen from ‘They Found a Cave.’”

Another customer came in with the story that he was interested in the display as he had worked side by side with Heather Chauncy, Nan’s daughter a few days prior, volunteering at the Maritime Museum.

Finding Heather Chauncy’s phone number on white pages, I promptly made a call to see if she would agree to come to Kingston LINC to talk for an hour about her memories of her mother and the books. She agreed and will be talking at Kingston LINC on Tuesday 18th August at 2pm-3pm. It is such an amazing opportunity and we are so very grateful for her involvement…but it seems that this is exactly what this exhibition has done – generated community interest, involvement, generosity and togetherness and isn’t that just what libraries do best…