Nan Chauncy - A children's author ahead of her time

Jenni Connor writes about the impact of Nan Chauncy on children's literature, through her connection with the Tasmanian landscape and indigenous peoples. Jenni has been pivotal in organising the Nan Chauncy events for 2015. John Marsden's, Nan Chauncy Oration is one of the highlight events.

Nan Chauncy was a ‘woman of her times and ahead of her time’ in relation to Tasmania’s Aboriginal people. In Mathinna’s People (1967), she has implicit faith in the record of events provided by George Arthur Robinson (whom she believes to be a ‘sincere and deeply religious man’) saying ‘the events are true and tragic; there is no happy ending’. She believes, as people did at the time, that ‘Mathinna’s People have vanished from the earth’. On the other hand, she strongly condemns the treatment of Aborigines by white people: ‘Their game was shot ruthlessly, the ground cleared for farms, and they were forced away…their women were captured by sealers…their children snatched by settlers…to work for them as little better than slaves’. 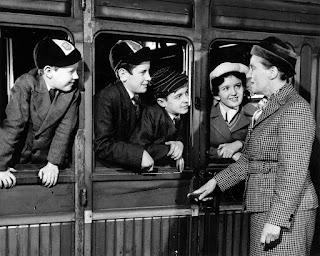 Her empathy for Tasmanian Aboriginal people is especially strong in Tangara (1961). This is a complex time-slip novel with great literary sophistication. It’s an adventure – of course – but the bush context is soundly established and the female protagonist emerges with impressive strength, resilience and depth of empathy for her ‘Aboriginal (ghost) friend’. Nan’s respect for the lore, loyalties, technologies and social structure of Aboriginal life is quite unusual for the times. Hugo McCann, retired lecturer from the University of Tasmania in his talk at the Launch of the Touring Exhibition at LINC in Hobart on 28th May, describes Tangara as ‘a deeply moving classic by one of our great children’s writers – part fantasy, part history and one hundred percent masterpiece’. (Photo: Nan meeting excited children)

In Tiger in the Bush (1957), Nan’s love of the Australian/Tasmanian bush – its flora and fauna – shines through palpably. Badge shows ‘reverence’ when viewing the fern gully, with its secret female platypus making her nest and later, on Tarn Mountain, catches a glimpse of a ‘wolfish creature with dark chocolate stripes’. Badge vows to ‘protect it from exploitation’ (the Thylacine was deemed extinct in 1936). The Lorenny Family trilogy – Tiger in the Bush, Devils’ Hill (1958) and The Roaring 40 (1963) – best represents Nan’s deep yearning for a ‘hidden valley in which a child can be free and capable, unspoiled by The Outside’. In her passion for this new country, Nan idealises ‘the simple bushman as an individualist and visionary who is spiritually connected to a place that is free from the taint of man’ (Brenda Niall, Australia Through the Looking Glass, 1985).  It is no wonder that Nan, Anton and later the family bequeathed the property at Bagdad (north of Hobart), known as Chauncy Vale, to the local council as a wildlife sanctuary. 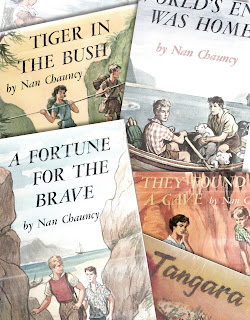 They Found a Cave (1947), Tiger in the Bush and Tangara remain Nan’s most accessible and enjoyable novels. Nan Chauncy gave Australian Literature for Children an authentic voice and her legacy lives on in today’s stunning writers and illustrators, who are still celebrated by the CBCA!

This year, the Tasmanian branch of the CBCA is organising an number of events to celebrate Nan Chauncy. Visit www.cbcatas.org for more details. The events
are as follows:

1. Travelling Suitcase Exhibition – commences at Hobart LINC for three weeks from 1 June and then tours through the state library system – check www.cbcatas.org/events/. Launceston and Devonport libraries will also co-host launches and Kingston, Rosny and Oatlands have expressed interest. The exhibition is free and we hope many, many families check it out.

3. They Found a Cave – Cinema quality screening with an introduction by John Honey and Q & A by Michael Woolford who played Nippy in the film. Screenings: The State Cinema, Hobart on Sunday 16th August and CMax Cinema Devonport on Sunday 30th August.

4. Picnic in the Vale at Chauncy Vale (Date TBA for early October) in collaboration with Southern Midlands Council and the Chauncy Vale Committee. People wishing to attend can purchase a ticket for $20 which provides a picnic pack, with juice or water and guiding through the cottage and up to the cave. People wishing to bring their own lunch will donate $5 towards the upkeep of Chauncy Vale.

(The Nan Chauncy Award recipient will be added to the Honour Roll held at Day Dawn Cottage.)