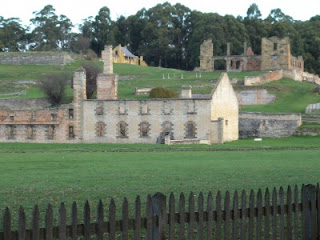 Recently, I’ve been spending a lot of enjoyable time doing some online research about Tasmanian convicts. Coincidentally – or is it cause and effect? – I have read several books with Tasmanian convicts as an important part of the tale. Here are two of them.

The first was an adult book, the challenging Vogel-winner The Roving Party by Rohan Wilson. It’s a complex story, set at the time of the Black Wars in Tasmania, about John Batman, farm-hand Gould, four downtrodden convicts and Black Bill, brought up by white society but retaining his traditional point of view . It gives an interesting version of the main character before he left his place of birth to establish Melbourne. It’s a heart-wrenching novel with black humour but elements of hope. Though adult in audience, it will appeal to some mature young adults.

I then followed this with the CBCA Younger Readers Short List Nanberry: Black Brother White by Jackie French. It’s set in the first ten or so years of Sydney and is a great mix of historical fact combined with the author’s fictitious characters. The reader comes to understand life in those early years: the squalor as well as the hardships, corruption and the threats to and challenges for the Aboriginal population. It was a book which sent me investigating because I wanted to know more about that period of our history.

Historical novels for me create a sort of time travel, allowing me to visit another era. The successful ones mean that I have an improved understanding of the past and a personal recognition that I may not have fared very well had I been alive at that time. I come away from some of my research with the same feeling. What would the convicts I have been investigating think of what I am doing?

And now I have just finished Orson Scott Card’s Pathfinder, written for young adults. This is pure fantasy, set in Garden a world established 11,191 years ago, with many similar elements to historical fiction but nothing to do with Tasmanian convicts. Rigg is able to see all the paths traced by people in the past as they move through the landscape. Umbo can transport people to the past and, if necessary, modify the future. Param can make herself invisible by slowing down time. It’s a typical fantasy quest where the main characters have to meet their challenges but the reader constantly needs to keep thinking because there are some complex paradoxes discussed. It’s long – 662 pages – so not for the faint-hearted, but a good book to make the reader think.