Books and movies - by Maureen Mann 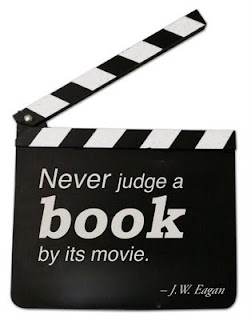 There’s always discussion as to whether the book or the film is better. It will never have a right answer, as it depends so much on the viewer and the reader. And we have many fabulous book-to-film creations to choose from. One of the most recent, apart from the Harry Potter series is Hugo, the 3D adaptation of Brian Selznick’s wonderful graphic novel called The Invention of Hugo Cabret. If you haven’t read this adventure, then do so. The illustrations are an essential part of the book but don’t be put off by its length: it’s a relatively quick read. The film is an interesting adaptation.

I started thinking about conversion of book to film after spending time in Canada with my young grandson who enjoys the many series on TV based on several all-time children’s classics. Some of his favourites are the adventures of Franklin (Pauline Bourgeois) and Max and Ruby (Rosemary Wells).  Which of our Australian children’s books, given unlimited production funds and a world distribution network being available, would convert well to pre-school series? We don’t have many titles based on one character which have been published. But in an ideal world … 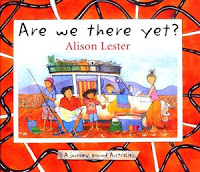 I’m only going to touch on some of the wonderful Australian authors and illustrators who could be included in this concept. People such as Mem Fox, Margaret Wild, Ann James, Graeme Base and Jenny Wagner should be considered. There are lots of adventures which could result from adaptations of Bear and Chook (Lisa Shanahan and Emma Quay) and which could include character and health education ‘lessons’: the concepts of sharing, caring and selflessness. Alison Lester’s Are We There Yet? would make a fabulous series about Australia without it merely becoming a travelogue. It could include similar elements to those that make the Dora the Explorer programs so successful: child interaction, I-spy events as well as basic geographic concepts. This is also the book which forms the basis of educational activities for under 12s as part of the National Year of Reading (Have a look what else is available at http://www.love2read.org.au/nyr-programs.cfm). 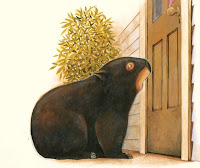 The Diary of a Wombat (Jackie French and Bruce Whatley) could introduce children around the world firstly to wombats and their eccentric habits including living in and near people, but also to our many unique Australian animals. This series could be extended to other Australian flora and fauna which do not co-habit areas with wombats. Mothball has such as strong personality that she could become an iconic creature.

Pamela Allen has several picture books which could be extended to create a mini-series of TV shows. There are lots of mathematical concepts which could be explored starting from the basis of Mr Archimedes’ Bath or Who Sank the Boat? 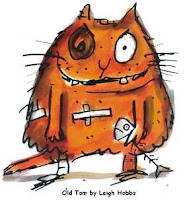 Just imagine some of Leigh Hobbs’ characters coming to life on the screen: Old Tom or Mr Badger, especially if Hobbs himself could be part of the production team. Hobbs has written many Old Tom adventures as well as 4 Mr Badger books (and more to come?). As his website says, ‘Old Tom is a barely house-trained lazy scruffy mischief-maker. With one bung eyes, a bandaged foot and assorted scratches, he creates havoc wherever he goes’. (http://www.leighhobbs.com.au/book9.html). What more could a production company demand! Both these collections are available in UK and USA which makes them even more universal than the ones which are essentially restricted to Australian audiences.

Those are my ideas. What do you think? What wonderful Australian children’s books do you think I have missed?
Posted by CBCA Tasmania at 13:52