It's the end of the world as we know it! 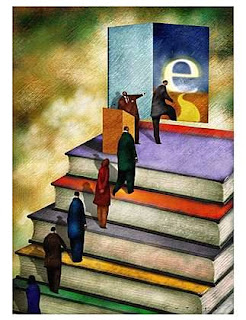 No, no, not "The Rapture" (although I would have been very disgruntled if that had happened yesterday, as it would mean I'd never get to read the new Nick Earls book ... or finish the sublime new Lili Wilkinson). I'm talking about not the future of life on our planet, but the future of what makes life on this planet (for many of us), worth living:

At the CBCA conference a week ago, I was asked to be on a panel about e-books and the future of reading. I was a bit nervous about talking on the topic as a) I am always nervous about talking in public (this is why I am a writer: so I can write instead of talk) and b) I felt completely ill-equipped to talk on an issue I'm only just getting my head around.

I don't know much about different e-readers, the technology behind them, the minefield that is "DRM", or statistics on who is shunning paper for pixels. I waver between being a bit scared of what the advent of e-books might herald; excited about the possibility of a whole new generation of readers discovering reading in an entirely different way, on an entirely different form of technology from that which my generation and those before are familiar with; and nostalgic about that very same technology. I like paper books. I'm a book nerd. It's a cliché, but I like the way they smell. I like "cracking" a spine. I like turning down pages. I like the weight of a book; the way it feels in my hand.

I also like publishers. This may sound unfashionable to all of those writers out there who think that this new digital revolution will mean they can more easily convey their message to the masses, bypassing the traditional publishing house route. And, maybe, before I was published by a couple of wonderful publishing houses, I might have felt a bit the same ... or maybe not. I've always known (through my work in libraries and book shops), that there can sometimes be a gap between the quality of self-published works and those published by a reputable publishing house. I know that's a generalisation. I have read some fabulous self-published work, especially recently as I've met some self-published authors with great talent (some of it, I wish had the wider audience that comes with a publishing house's marketing department). But, I'm worried that if self-publishing becomes easier, this work will be in the minority, and will get lost amongst the less-wonderful stuff.

The reason some self-published work is of a much lower quality than that produced by traditional publishing methods is that publishing houses help a writer to craft a product. The incredibly talented editors who work for publishing houses take what is often a fairly raw material (it's not called a rough draft for nothing), and help a writer to make it into something polished and well-executed. I worry that, with the ease of self-publication that will come with e-books, this crucial step in the publishing process will be neglected, and what we will be left with is a million rough drafts.

That said, people are discerning. Just like they are able to ferret out precious little truffles of books in a bookshop and discard the mud that often surrounds them, I reckon they'll be able to pick out a great digital book amongst other lesser offerings.

My other worry about the e-book "revolution" (though, in Australia, at the moment, it's more like a small peaceful protest - but one that grows in size daily), is that we haven't quite worked out all the twists and turns of the law regarding the ownership of the books. When you buy an e-book, you don't actually own it; you're just licensed to read it. That, to me, is kind of sad. Pricing is another issue that will probably take awhile to settled in to a "good place".

So they're the negatives. The positives are many. For one thing, if it facilitates a whole new generation of passionate readers, bring it on! Gen Y and "Millennials" have grown up with, if not a silver spoon in their mouths, then an iPad in their hands. This is their reality. Technology is as integrated into their lives as paper and pens were in ours. It seems a natural extension that, as they can watch movies and listen to music on their "devices", so they should be able to read books. Reading is - for the most part - entertainment. It's fun. I worry that, if we say to kids that they can listen to music and watch movies and surf the internet on their iPads and smartphones, but they're not allowed to read books on them, we'll be sending a message that reading isn't as fun as those other activities. Plus, as the great Michael Pryor said, "It's the message, not the medium". It's the same book; the same words. One just has real pages. The other has a "page turn function".

It's not the end of the world as we know it. Just like "The Rapture" turned out to be just a great excuse for us to examine our lives, table our regrets, and make some positive plans for the future of our existence if we did survive the "earthquake, the advent of e-books gives us an opportunity to view the publishing industry with fresh eyes - see what's working and what isn't and, most importantly, convert a whole new generation of believers to the rapture that is reading.